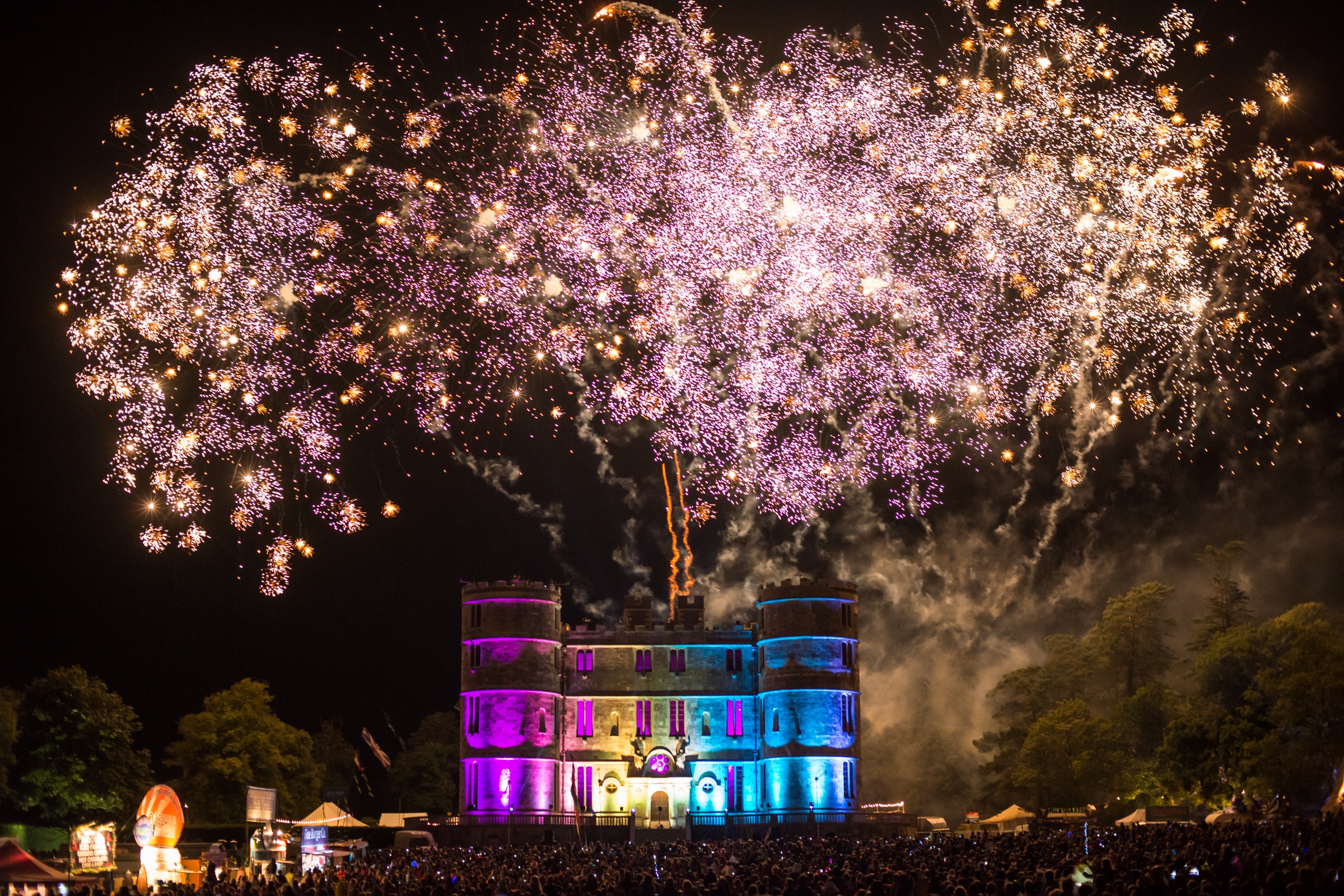 When we originally announced our Movies theme, we didn’t quite expect 2020 to be the kind of show-stopper it became. But if there’s one thing we’ve learned it’s that you’ve got to keep rolling. So, we are very pleased indeed to announce the return of Camp Bestival, back in the spacious grounds of Lulworth Castle from Thursday 29th July to Sunday 1st August. Scored by the very best music acts around and bursting with blockbuster action don’t miss out on Camp Bestival 2021 because we mean it when we say ACTION.

“Take two indeed! Take one was looking pretty good through the lens but take two is taking things to a whole new level with some amazing new additions to our cast. Step up very special guest Kelis making a huge comeback at the moment, the best maître d’ in the world Fred Sirieix helping us curate our food offerings, add in Charlatans frontman Tim Burgess live, a proper standalone comedy tent, a new clubby space for parents and teens and loads more fresh ideas … and, of course, the fans’ favourite Venagboys are back. We asked you guys and you voted for the return of the Vengabus. We want Camp Bestival 2021 to be the best family festival you’ve ever witnessed, so we hope to see you at the Castle!”  Josie & Rob da Bank 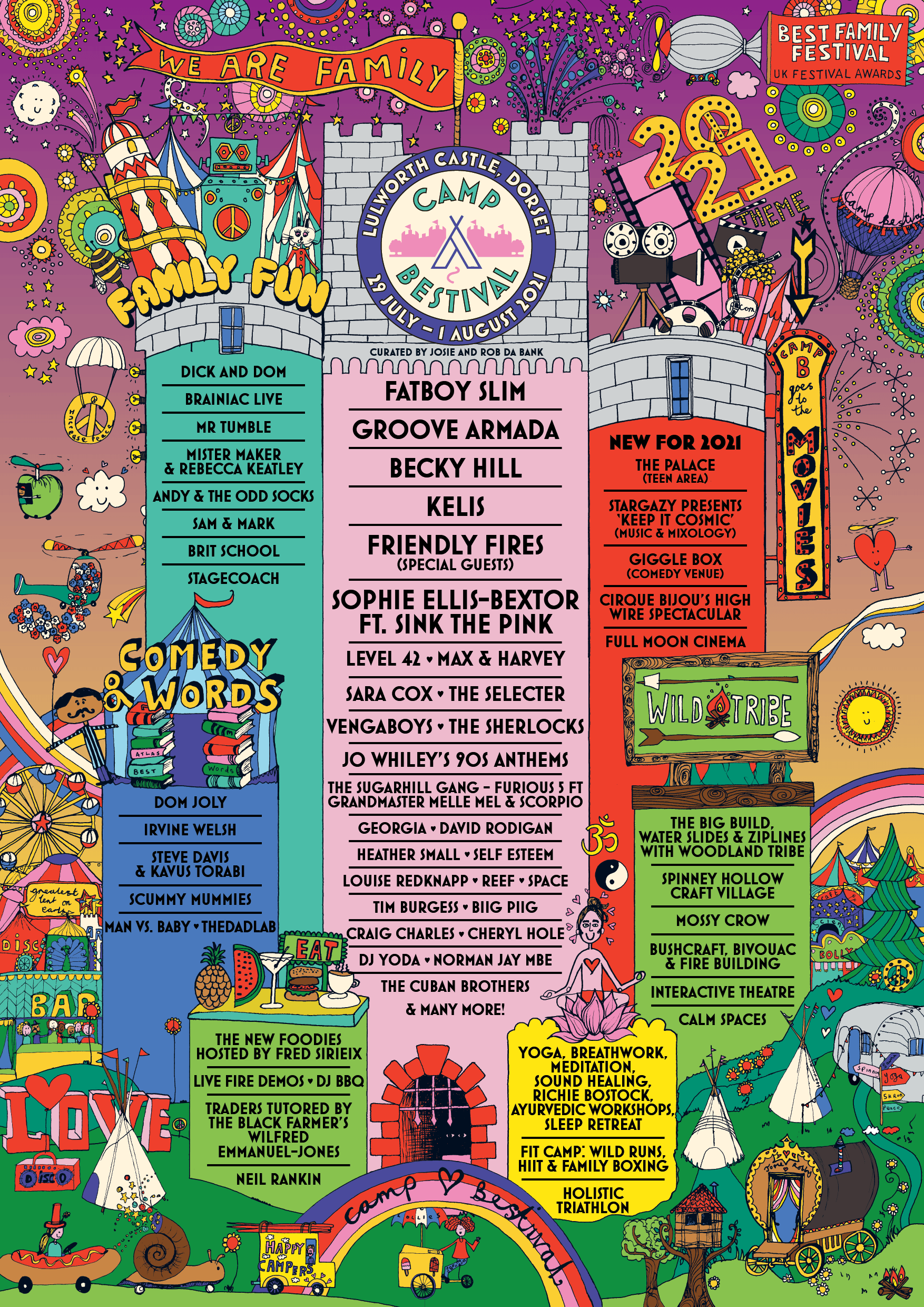 Featuring a cast and crew that reads like the greatest soundtrack ever made, expect movie music magic from the likes of Fatboy Slim who remains our weapon of choice to top the bill on Saturday night following a set from special guests Friendly Fires. We’ll say hello to the nightclub sounds of Groove Armada and we’ll most certainly have heaven on our minds when Becky Hill takes to the stage heading a glittering Friday night Castle Stage triumvirate that also includes a tasty turn from Kelis and Sophie Ellis-Bextor featuring daring doyens of the dance, Sink The Pink.

Our movie-themed weekend won’t be short on the talkies with comedy and spoken word appearances from Trigger Happy TV’s Dom Joly, award winning author Irvine Welsh, and snooker great and leftfield music authority Steve Davis and his DJ partner Kavus Torabi. Plus, there’s more verbalising and vaudeville across the weekend from the likes of Scummy Mummies, Man Vs. Baby, TheDadLab and Wacaday mainstay Timmy Mallett!

No Camp Bestival would be complete without lashings of bonhomie and fabulous fare. So, expect food and drink fun that caters to all tastes including The New Foodies hosted by Fred Sirieix, live fire demos, traders tutored by The Black Farmer’s Wilfred Emmanuel-Jones, Neil Rankin, DJ BBQ, Fizz Bar and Mother Earth’s Open Kitchen.

If contemplative vibes are more your focus, then head to Slow Motion to enjoy the delights of yoga, breathwork including an appearance from Richie ‘the breath guy’ Bostock, meditation, sound healing, ayurvedic workshops, and a sleep retreat. Or set your pulses racing with Fit Camp including wild runs, HIIT & family boxing, and a holistic triathlon.

With a cast of long-term faves already in place, Camp Bestival also has some superstars in the making with The Palace our new teen area, Stargazy Presents ‘Keep It Cosmic’, a blend of music & mixology, the Giggle Box our new comedy venue, Cirque Bijou’s High Wire Spectacular and, of course, the Full Moon Cinema, all brand new for 2021.

As ever, there are a multitude of options for camping out at Camp Bestival. Featuring the very finest in outdoor living, check out all the expansive options that range from our roomy General Camping fields, through the generous plots of Camping Plus and Backstage Camping right up to the none-more luxurious Boutique options, Campervans, Caravans and beyond.

Good things come to those who wait, so join us on the dramatic Jurassic Coast when Camp Bestival Goes to the Movies in 2021!