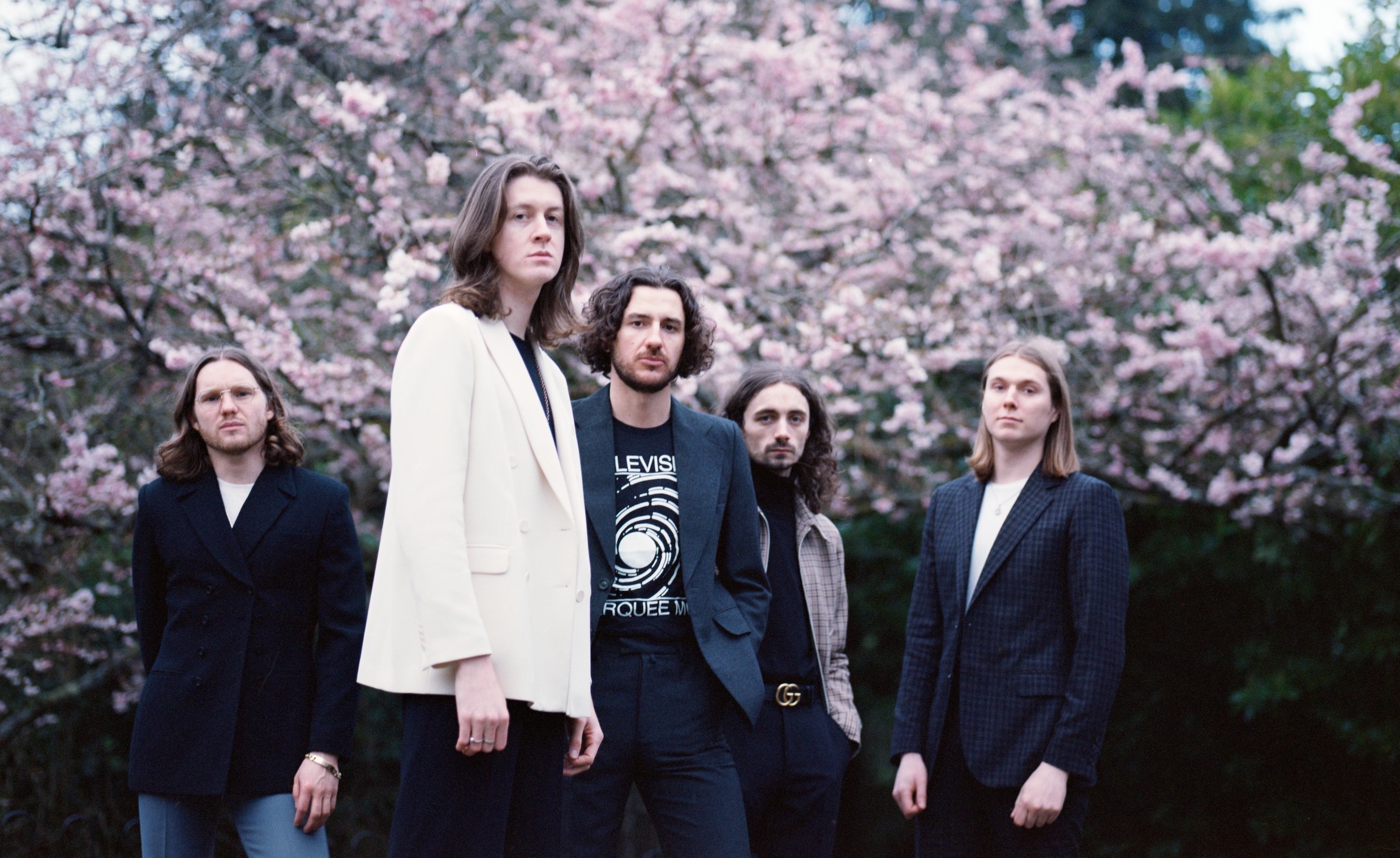 You can take the lads out of Stockport. In fact you can take the lads all the way to Sunset Strip, the very rock'n'roll Marquis hotel, the historic Roxy venue for a headline show and the absolutely iconic Rainbow bar next door for a drink beforehand, but the five men who form indie band Blossoms are unmistakeably Northern even within the confines of Los Angeles. “I thought we'd be able to get to the end of an interview without talking about spaghetti bolognese but apparently not,” jokes frontman Tom Ogden squeezed in a booth. His four best mates have been scratching their heads for an answer about what we can expect from Blossoms 3.0, Blossoms 2020, Blossoms on their pivotal follow-up to second album “Cool Like You”. Until guitarist Josh Dewhurst breaks the silence. “The new version of Blossoms is like when you leave the Ragu in the fridge overnight,” he says. “It tastes so much better the next day.”

There's a patiently deeper, infinitely richer, and a more delicious maturity to the new Blossoms. Their third album “Foolish Loving Spaces” is one you can luxuriate over; rooted in great tunes but filled with new bells and whistles. In order to make it they haven't taken a lot of time off. That's not their style. They eat, drink, sleep, breathe, and vibe Blossoms. When they have a day off, they'll be doing something Blossoms related. Even if it's clearing out their rehearsal space in Stockport (which has thankfully graduated now beyond bassist Charlie Salt's grandfather's scaffolding yard). They cannot stop. Despite all the success they've had since forming in Stockport in 2013 (and naming themselves after a local pub), including a Number 1 Mercury Prize-nominated debut album in 2016, a Top 5 second LP, and countless sold-out tours, plus a homecoming show in front of 20,000 people at Edgeley Park this past summer, the quintet have never left Stockport. They're simply not interested.

“Stockport is important for our sanity,” says drummer Joe Donovan. “It's just real, innit,” says Josh. “It's where we're from. It's not like now we're doing this crazy shit so we should go and live somewhere mental.” Even London feels too mental to them. It's never been part of their plan. They just want to make the best tunes, and Stockport is their magic ingredient. This time around there was an offer to go to Nashville to record but pianist Myles Kellock comments that it would have been way more expensive. So wise. So sensible. Not terribly rock'n'roll. Then again, they had everything they needed back home: family, friends, and former Coral frontman James Skelly, the unofficial sixth member of Blossoms and their eternal muse, producer and – according to Tom – Jedi Master. Skelly tried to push them towards another producer, but the desire to evolve was already within them. They recorded single 'Your Girlfriend' with him before the summer and the experience cemented their belief that he was the right man for the full album job. “The Beatles worked with George Martin the whole time,” reasons Tom. “U2 worked with Brian Eno. Other people have chopped and changed and it's worked for them. But every band is different.”

Returning to Stockport didn't mean resting on their laurels. They sought to challenge themselves, stretch beyond what they thought possible for Blossoms' sound. So they hired a gospel choir. They brought a lapsteel guitar into the studio for the first time. Tom also got better real estate. Instead of writing in the makeshift backroom of his parents' place, he moved in with his girlfriend in a new house, and kitted out a backroom there. With a piano this time, too.

The first song Tom wrote there was album opener ‘If You Think This Is Real Life’. From then, a whirlwind of ideas spawned. There was such an outpouring in fact that the band entertained releasing three mini albums. Realising they might be getting a little carried away, they got to putting together the full-length third “Foolish Loving Spaces” – a title cribbed from the lyrics to final song 'Like Gravity'. That phrase is a source of inspiration Tom can't quite recall the origins of. He's always jotting things down from books he's read, or poems he's found, or from the backs of vinyl he's collected. Sometimes he sticks them into a song title generator app he has on his iPhone. (Seriously). He got lucky with 'If You Think This Is Real Life' - another future single. He saw the words “real life” flash up on the TV, and punched them into the app. It spat that full title out. Within minutes, Tom was humming the chorus, and had to send his visiting mother home so he could figure the rest of the song out on his piano. Sorry mum.

From Christmas 2018 through the start of 2019, Tom's bandmates were equally as inspired by all the ideas they were being sent. “There was a real confidence in Tom's ideas,” recalls Charlie. “He was sending these demos relentlessly and they were all fucking incredible. Holy shit. But you could tell that Tom had abandoned the idea of needing to sustain any one kind of thing. Each song was so different. There was a proper maturity to it. We were buzzing.” Tom was in love, too. And not just with songwriting. With his girlfriend. With that, he was writing his most positive batch of songs ever during a time when we really could use some optimism – some songs to go out dancing to on a Saturday night. “The album is a celebration of love,” says Tom. “There's less heartbreak. I've always found it more difficult to write about being in love so I've tried to do it quirky.” An example is the humorous 'Oh No' with its lyric: “Oh no! I Think I'm In Love!” “We've all been there,” says Tom. “You do some really weird stuff when you're in love, don't ya?” adds Charlie. “I'm on a love hiatus,” chirps Josh. Everyone laughs.

Together the fivesome debunked in the same studio at Parr Street in Liverpool with Skelly and Rich Turvey. Their references were getting more grandiose now, too. The triad of albums that Tom was holding a flame to were U2's “Joshua Tree”, Primal Scream's “Screamadelica” and Talking Heads' “Stop Making Sense”, ie, hugely ambitious rock records. Talking Heads were relatively new to Tom. He liked the groove, the edge of their album cuts, and the fact that they weren't bound by rules. First single 'Your Girlfriend' was inspired by 'This Must Be The Place'. It felt appropriate to have songs that reached for bigger audiences and vaster spaces by this point in their career. So when the idea sparked that maybe a gospel choir would suit 'The Keeper', they had one in to the session. They added reverberated guitars on 'My Swimming Brain' and some lap steel too. It felt like a natural progression and it also felt unfamiliar. This was the first time since making a debut LP that they had longer to experiment and less pressure to deliver. They were excited about making something just the right side of them with room to be a little surprising. When 'Your Girlfriend' was released in the summer in all its slide guitar glory and scored plays on BBC Radio 1 they were reassured that going with their gut instincts was the right move.

It's not easy to be a British indie band these days. Venues are threatened with closure. There's a lack of cohesive scenes. But Blossoms are flying the flag for chasing your dreams, regardless of what town you're from, or how little places there are to play. What's most important is that they remain amazing mates. “I'm buying a house with Josh. That's proof!” says Charlie. “Sometimes we get a bit of an argument but we never hold grudges with each other,” says Joe. “Each one of us loves the band more than anything.” They just want what's best for Blossoms. “We know enough about tunes to know that 'The Keeper' is fucking massive,” says Tom, apologising if that comes across as arrogant. It's healthy to hear a band proudly showing off their wares. “I could see gospel singers having it. Fucking hell! It's gone up a level!” After seven years together, it's the right moment.

Besides the band just got a taste of how epic the future could be after selling out their hometown stadium. Did that shift anything in their perspective? “It was a step into that other world,” says Tom. “We are bigger in our hometown. We wanna get bigger like that everywhere. The enormity of it was wow. We were ready for it.” Spoken like a man prepared for a whole new dimension.